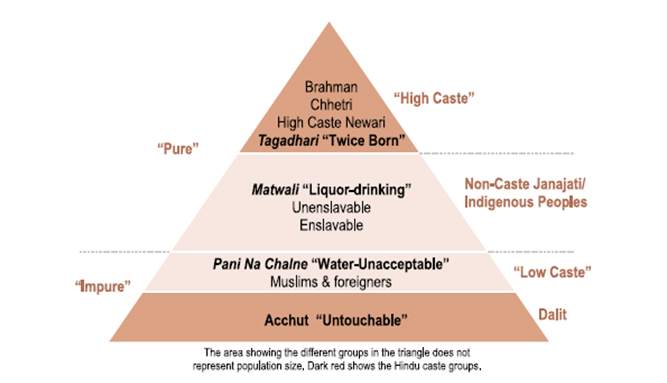 The term ‘Dalit’ refers to a social group made up of diverse ethnicities that have been systemically marginalized in South Asia. Dalits are considered to be ‘untouchable’ in the traditional social hierarchy of the Indian subcontinent. Based on the Hindu Varna system, this hierarchy excludes many ethnic groups deemed “too impure” to merit inclusion. Following the criminalization of untouchability in many of the countries in the region, the term ‘Dalit’ is a self- identity signifier which means ‘oppressed’ or ‘broken,’ and is used to refer to people belonging to castes which have been subjected to untouchability. Rather than conveying a sense of inferiority by birth, the word is taken as an inherent denial of such inferiority by birth, karma (fate), and caste hierarchy. The term has developed into a significant sociopolitical concept which not only suggests a state of degradation but also serves as a meaningful source of identity and pride.

The roots of Dalit oppression date back to the origins of the caste system in the Hindu religion. Dalits are excluded from the four-fold varna system of Hinduism and were seen as forming a fifth varna. Brahmins remain at the top tier of the caste system, which includes the priests and arbiters of morality in all matters of religion and society. The second tier includes Kshatriyas, who are considered to be soldiers and administrators. The Vaisyas represent the artisan and commercial classes and finally, the Sudras are the farmers and the peasant class. These four caste groups are said to have come from Brahma’s mouth (Brahmin), arms (Kshatriyas), thighs (Vaisyas) and feet (Sudras). Beneath the four main caste groups is a fifth group, Dalits. The philosophy of caste is contained in the Manusmriti, a Hindu text dating from the second century BCE. ‘Untouchable’ outcast communities were forbidden to join in the religious and social life of the community and were confined to menial tasks that were viewed as “polluting,” such as animal slaughter and leatherworking. Dalits are mainly present in South Asian countries like Nepal, India, Bangladesh, Sri Lanka, and Pakistan.

Dalits in Nepal stand at the intersection of socioeconomic and political oppression and have long been deprived of basic human rights due to wide-ranging discriminatory practices. Although Dalits represent 13.6 % of the Nepali population (30 million), 48% experience poverty, the literacy rate among Dalits is roughly 40%, and approximately 60% of Dalits experience chronic childhood malnutrition (CBS, 2011).

Dalits face caste-based discrimination and untouchability in their daily lives at water springs and taps, in employment, schools, hotels, temples, and milk cooperatives. Beyond the quantifiable measures of exclusion, Dalits suffer from other forms of social and psychological deprivation. Loss of personal and collective self-respect, physical and economic insecurity, and exploitation of labor are just a few examples. Dalit women have low status within their own groups, and as such they occupy an even more disadvantaged position than their male counterparts.

According to the official 2011 census, Dalits constitute 13.6 percent of the total population (appr. 3.6 million), but researchers and Dalit organizations suggest that this number could be above 20 percent – possibly as many as five million people.  As identified by the Dalit Development Committee of the Ministry of Local Development (MoLD), there are 28 Dalit groups (which was later reduced to 23).

Dalits participating in the commercialized adaptations of their traditional occupations, particularly in tourism-centered urban spaces, are often touted as the image of ‘traditional Nepal’ while simultaneously experiencing marginalization and discrimination due to their caste. This further confuses self-image and identity among Dalits and contributes to the misleading notion of the eradication of casteism in cosmopolitan spaces. The somewhat performative celebration of occupations and cultural symbols traditionally associated with historically marginalized communities creates a juxtaposition where symbols of national cultural identity are celebrated while their originators are oppressed.

o   The Caste Based Discrimination and Untouchability (Offence and Punishment) Act, 2068 (2011)

o   Constitution of Nepal (Article 16- Right to live with dignity, Article 24-Right against untouchability and discrimination, and Article 40: Rights of Dalits)